Chemical cues and signals mediate resource acquisition, mate finding, and the assessment of predation risk in marine plankton. Here, we use the chemical properties of the first identified chemical cues from zooplankton together with in situ measurements of turbulent dissipation rates to calculate the effect of turbulence on the distribution of cues behind swimmers as well as steady state background concentrations in surrounding water. We further show that common zooplankton (copepods) appears to optimize mate finding by aggregating at the surface in calm conditions when turbulence do not prevent trail following. This near surface environment is characterized by anisotropic turbulence and we show, using direct numerical simulations, that chemical cues distribute more in the horizontal plane than vertically in these conditions. Zooplankton may consequently benefit from adopting specific search strategies near the surface as well as in strong stratification where similar flow fields develop. Steady state concentrations, where exudation is balanced by degradation develops in a time scale of ~5 h. We conclude that the trails behind millimeter-sized copepods can be detected in naturally occurring turbulence below the wind mixed surface layer or in the absence of strong wind. The trails, however, shorten dramatically at high turbulent dissipation rates, above ~10−3 cm2 s−3 (10−7 W kg−1)

“Infochemicals” (information-conveying chemicals) dominate much of the underwater communication in biological systems. They influence the movement and behavior of organisms, the ecological interactions between and across populations, and the trophic structure of marine food webs. However, relative to their terrestrial equivalents, the wider ecological and economic importance of marine infochemicals remains understudied and a concerted, cross-disciplinary effort is needed to reveal the full potential of marine chemical ecology. We highlight current challenges with specific examples and suggest how research on the chemical ecology of marine organisms could provide opportunities for implementing new management solutions for future “blue growth” (the sustainable use of ocean resources) and maintaining healthy marine ecosystems. 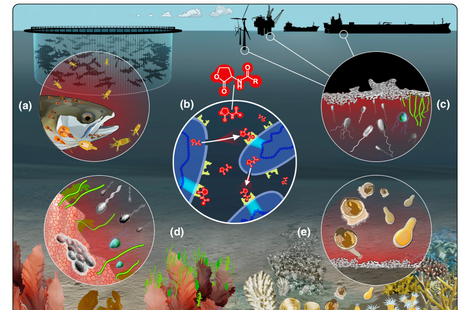 Bioluminescent dinoflagellates grow at one third the rate of their competitors of equivalent size, such as diatoms [ 1 ]. Despite this disadvantage, dinoflagellates successfully persist within phytoplankton communities and even form large blooms during favourable conditions. One explanation for this paradox is that bioluminescence acts as a defence that reduces losses to zooplankton grazers, such as copepods [ 2 , 3 ]. Lindström et al. [ 4 ] found that the dinoflagellate Lingulodinium polyedra (F.Stein) J.D.Dodge increase their bioluminescence in response to copepodamides [ 5 ], polar lipids exuded by copepod grazers, allowing for a brighter flash when bioluminescent capacity is stimulated. Here, we show that copepodamide-induced bioluminescence in L. polyedra causes a marked shift in the grazing preference of the copepod Acartia tonsa Dana. L. polyedra goes from being the preferred prey when non-bioluminescent to near complete rejection when pre-treated with copepodamides to induce a higher bioluminescent capacity. High-speed and low-light-sensitive videos show how L. polyedra cells flash upon contact with the copepod and are subsequently rejected, seemingly unharmed ( Videos S1 and S2). Instead, A. tonsa shows compensatory feeding on the alternative prey. 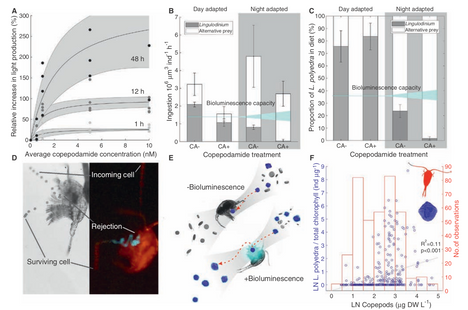 The clinging jellyfish Gonionemus sp. is a small hydromedusa species known historically from the Swedish west coast but not reported in recent times. This species is thought to be native to the northwest Pacific where it is notorious for causing severe stings in humans and is considered invasive or cryptogenic elsewhere. This year, unlike in the past, severe stings in swimmers making contact with Gonionemus sp. medusae occurred in Swedish waters from a sheltered eelgrass bed in the inner Skagerrak archipelago. To the best of our knowledge, this is only the second sting record of Gonionemus sp. from the Northeast Atlantic—with the first record occurring off the Belgian coast in the 1970s. Stinging Gonionemus sp. medusae have also been recently reported from the northwestern Atlantic coast, where, like on the Swedish coast, stings were not reported in the past. We analyzed sea surface temperature data from the past 30 years and show that 2018 had an exceptionally cold spring followed by an exceptionally hot summer. It is suggested that the 2018 temperature anomalies contributed to the Swedish outbreak. An analysis of mitochondrial COI sequences showed that Swedish medusae belong to the same clade as those from toxic populations in the Sea of Japan and northwest Atlantic. Gonionemus sp. is particularly prone to human-mediated dispersal and we suggest that it is possible that this year’s outbreak is the result of anthropogenic factors either through a climate-driven northward range shift or an introduction via shipping activity. We examined medusa growth rates and details of medusa morphology including nematocysts. Two types of penetrating nematocysts: euryteles and b-mastigophores were observed, suggesting that Gonionemus sp. medusae are able to feed on hard-bodied organisms like copepods and cladocerans. Given the now-regular occurrence and regional spread of Gonionemus sp. in the northwest Atlantic, it seems likely that outbreaks in Sweden will continue. More information on its life cycle, dispersal mechanisms, and ecology are thus desirable. 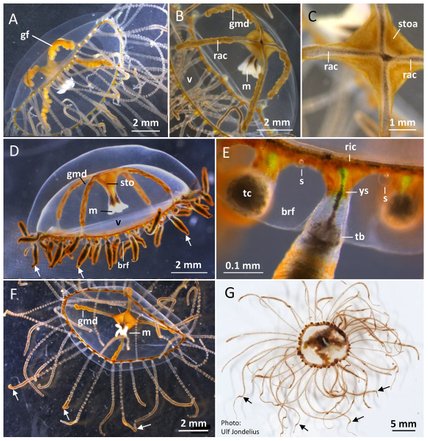 Fear of predation may influence food webs more than actual predation. However, the mechanisms and magnitude of nonconsumptive predator effects are largely unknown in unicellular-dominated food webs such as marine plankton. We report a general mechanism of chemically induced predator effects in marine plankton. Copepods, the most abundant zooplankton in the oceans, imprint seawater with unique polar lipids—copepodamides—which trigger toxin production and bioluminescence in harmful dinoflagellates. We show that copepodamides also elicit defensive traits in other phytoplankton, inducing the harmful algal bloom-forming diatom Pseudo-nitzschia seriata to produce 10 times more toxins, and colony-forming diatoms to decrease colony size by half. A 1-year study in the northeast Atlantic revealed that natural copepodamide concentrations are high enough to induce harmful algal toxins and size reduction in dominant primary producers when copepods are abundant. We conclude that copepodamides will structure marine plankton toward smaller, more defended life forms on basin-wide scales.

Illustration of the signaling system. 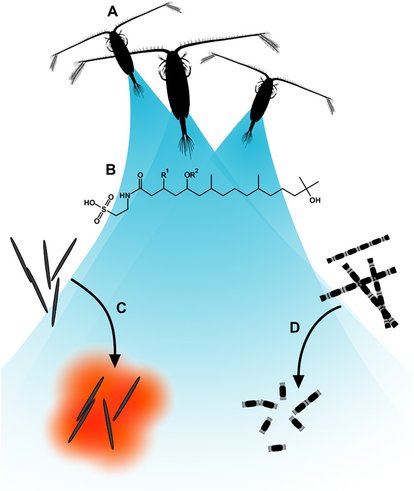 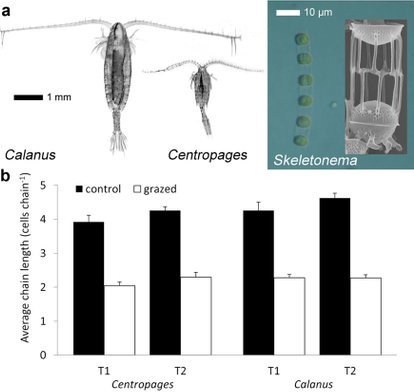 Diatoms and copepods are main actors in marine food webs. The prey–predator interactions between them affect bloom dynamics, shape marine ecosystems and impact the energy transfer to higher trophic levels. Recently it has been demonstrated that the presence of grazers may affect the diatom prey beyond the direct effect of grazing. Here, we investigated the response of the chain-forming centric diatom Skeletonema marinoi to grazer cues, including changes in morphology, gene expression and metabolic profile. S. marinoi cells were incubated with Calanus finmarchicus or with Centropages typicus and in both cases responded by reducing the chain length, whereas changes in gene expression indicated an activation of stress response, changes in the lipid and nitrogen metabolism, in cell cycle regulation and in frustule formation. Transcripts linked to G protein-coupled receptors and to nitric oxide synthesis were differentially expressed suggesting involvement of these signalling transduction pathways in the response. Downregulation of a lipoxygenase in the transcriptomic data and of its products in the metabolomic data also indicate an involvement of oxylipins. Our data contribute to a better understanding of the gene function in diatoms, providing information on the nature of genes implicated in the interaction with grazers, a crucial process in marine ecosystems.

Grazers can induce toxin (domoic acid, DA) production in diatoms. The toxic response has been observed in two species of Pseudo-nitzschia and was induced by Calanus copepods. In this study, interactions between diatoms and copepods were further explored using different species of diatoms and copepods. All herbivorous copepods induced toxin production, whereas exposure to carnivorous copepods did not. In line with this, increasing the number of herbivorous copepods resulted in even higher toxin production. The induced response is thus only elicited by copepods that pose a real threat to the responding cells, which supports that the induced toxin production in diatoms evolved as an inducible defense. The cellular toxin content in Pseudo-nitzschia was positively correlated to the concentration of a group of specific polar lipids called copepodamides that are excreted by the copepods. This suggests that copepodamides are the chemical cues responsible for triggering the toxin production. Carnivorous copepods were found to produce less or no copepodamides. Among the diatoms exposed to grazing herbivorous copepods, only two of six species of Pseudo-nitzschia and none of the Nitzschia or Fragilariopsis strains responded by producing DA, indicating that not all Pseudo-nitzschia species/strains are able to produce DA, and that different diatom species might have different strategies for coping with grazing pressure. Growth rate was negatively correlated to cellular domoic acid content indicating an allocation cost associated with toxin production. Long-term grazing experiments showed higher mortality rates of grazers fed toxic diatoms, supporting the hypothesis that DA production is an induced defense mechanism. 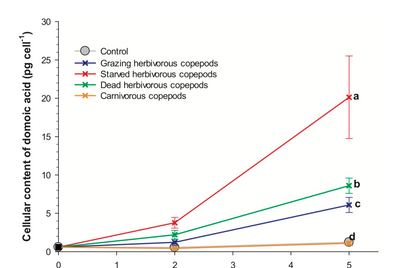 Short flashes of blue light (bioluminescence) from dinoflagellates can reduce copepod grazing of light-emitting cells. Other protective strategies against grazing are toxicity, reduced cell chain length and altered swimming patterns in different phytoplankton. Both toxicity and bioluminescence capacity in dinoflagellates decrease in copepod-free cultures, but toxin production can be restored in response to chemical alarm signals from copepods, copepodamides. Here we show that strains of the dinoflagellates Lingulodinium polyedra and Alexandrium tamarense, kept in culture for 14 and 9 years respectively, are capable of increasing their total bioluminescence capacity in response to copepodamides. The luminescence response to mechanical stimulation with air bubbles also increases significantly in L. polyedra after exposure to copepodamides. Effects on size, swimming speed and rate of change of direction in L. polyedra and A. tamarense were not detected, suggesting that post-encounter mechanisms such as bioluminescence and toxin production may constitute the dominating line of defence in these taxa. To our knowledge, this study provides the first evidence of changes in bioluminescence physiology as a response to chemical cues from natural enemies and emphasizes the importance of bioluminescence as an anti-grazing strategy. 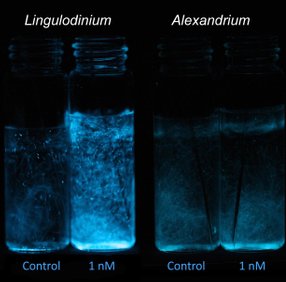